While being on this book committee at work, I have read some amazing books this year. Some of these books, I feel, really should be highlighted to our library community and helmed as one the best books of the year for their ingenuity and compelling storytelling.

However, there were some on the committee who felt that they were not only “list-worthy” (a term that I’m really starting to hate) but not deemed appropriate for teens to read.

That really irked me. Who are we, the considered caretakers of literature, to deem which books are deemed to be appropriate for teens? Isn’t our job to get teens to read and if these books do that, doesn’t it mean we did our job? When it comes to young readers, I think we concentrate more on what they should be reading instead of what they can read.

So in honor of Banned Books Week , a celebratory week to combat censorship and observe the freedom to read what we choose, I thought this would be the perfect opportunity to highlight the books that may cause controversy, but doesn’t stop it from being either an impactful or enjoyable book anyone can read:

Synopsis: Adolescent girls can be real monsters. Maude is twelve, about the age some girls turn into flesh-eating wild cats. As her detective dad investigates a series of strange mauling attacks, Maude worries she may be the killer.

Why is it Controversial: Chelsea Cain, the author, has been criticized for the comic series for presenting a binary view of gender, meaning it excludes the experiences of transgender men and women and nonbinary people. These attacks led to Cain deleting her Twitter account. People on the committee believed to be offensive and not appropriate for teens to read.

Why It Needs to Be Read: This innovative graphic novel not only incorporates advertisements that look so realistic but it demonstrates a strong agenda of societal stereotypes of the menstrual cycle. There are not many books out there that talk about having your period so openly and this comic does it way that is impactful, relatable and humorous, all wrapped up in a bow. 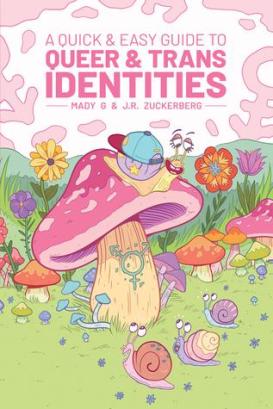 Synopsis: In this quick and easy guide to queer and trans identities, cartoonists Mady G and JR Zuckerberg guide you through the basics of the LGBT+ world! Covering essential topics like sexuality, gender identity, coming out, and navigating relationships, this guide explains the spectrum of human experience through informative comics, interviews, worksheets, and imaginative examples. A great starting point for anyone curious about queer and trans life, and helpful for those already on their own journeys!

Why Is It Controversial: Some felt that the snail portrayal was inappropriate and be a little offensive to a young audience.

Why It Needs to Be Read: There are a lot of Trans & Queer Identities out there and not a lot of books that can explain to a young audience in a way that they could understand. We, as adults, may not understand it. However, that may be the point. We can learn from the information it gives but that doesn’t mean should restrict the way it is presented.

Synopsis: Protecting your turf, keeping other guys from pawing at your girl, showing everyone who’s boss–it’s all in a day’s work when you’re a street thug…or a street cat!

Why Is It Controversial: Some of the female characters were put in sexual poses that felt were to raw for young eyes.

Why It Needs to Be Read: To be honest, this one doesn’t need to be read. The story itself was interesting and saw a unique take of a street cat gang but there are better manga series out there. However, the questionable scene was mediocre at best and have seen a lot worse in Marvel or DC Comics (an aspect that I think people find more acceptable). I wouldn’t recommend this to a younger child but I would go by the rating that is provided on the back of the book, which is “Teen”

Go With the Clouds North by Northwest, V. 1 by Aki Irie

Synopsis: Kei Miyama is a 17-year-old with three secrets: he can talk to cars, he can’t handle pretty girls, and he works as a private investigator. One case has him searching for a beloved dog, another involves reuniting a woman with a man she fell for at first sight. And then comes a case that strikes close to home—searching for his own little brother.

Why Is It Controversial: This book caused a lot of heated discussion and debate that led to harsh judgements, strong bias and what I felt, inaccurate accusations. Like with Nyankees, there were two sexual explicit scenes that were inappropriate and were considered to be condoning “sexual assault”.

Why It Needs to Read: It may not be an impactful book but it is a manga that shows us that we may be going down a tricky and dangerous road. If we go looking for the things that make us uncomfortable, how are younger audiences suppose to learn about those “uncomfortable” things if we are not letting them read about it? It may not be the “best book of the year”, but we are not doing our part to display the book. Aren’t we doing the same thing that we rebuke parents and officials of doing.

Synopsis: Grass is a powerful antiwar graphic novel, telling the life story of a Korean girl named Okseon Lee who was forced into sexual slavery for the Japanese Imperial Army during the Second World War—a disputed chapter in twentieth-century Asian history.

Why Is It Controversial: Contains sexual explicit scenes that most would consider to be inappropriate to teens. Also, some felt that the publisher, Drawn + Quarterly doesn’t really publish books that target a teen audience.

Why It Needs to Read: This book may have been difficult to read but it was also difficult to put down. It discusses an event in the Second World War that I do not think that is being taught in schools and need to be discussed throughout all reading audiences. How are we move forward in our future if we are prevented to learn more about our past? 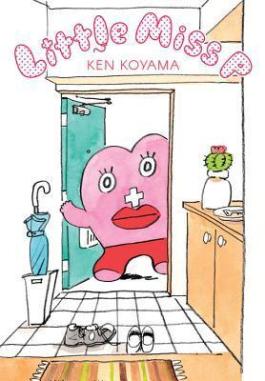 Synopsis: It’s that time of the month, and you know what that means…a visit from Aunt Flo–scratch that–Little Miss P! This pink, anthropomorphized period’s not so lean, kinda mean, and a gut-busting, butt-kicking machine! (Just ask Mr. Erection…) Follow Little Miss P as she traverses time advising, harassing, abusing, and comforting women on her (usually) monthly visits in this uniquely weird and surprisingly touching manga!

Why Is It Controversial: Like Man-Eaters, it talks about women’s menstrual cycle and thought to be inappropriate for teens.

Why It Needs to Read:For a male author to write this, Koyama managed to capture all of the female emotions so accurately. As I was reading this, I either laughing out loud or constantly saying to myself “Yes, that has happened to me. Although short chapters, it contains stories that I think most women would relate to. There is also an interesting introspective of how both men and women think of one another. I found that to be very insightful. Koyama also threw in a little history as well, such as the fictional story inspired by the life Yoshiko Sakai, who invented Japan’s first sanitary napkins and Katsushika Ōi, a Japanese Ukiyo-e artist.

Synopsis: MEET FLOYD. He’s a tennis star. Possibly good enough to win Wimbledon one day. MEET MIKE. He’s… different. Apart from anything else, Floyd seems to be the only one who can see him. But Mike must have appeared for a reason. And finding out why is perhaps the most important thing Floyd will ever do…

Why Is It Controversial: Some on the committee felt that this not only read on the young side (middle school level) and also did not give a representation of mental health.

Why It Needs to Read: Not only did this give, I feel, a great representation of mental health, this delightful coming-of-age story will make it easier for teens who are not at the reading level they should be. Maybe the middle grade storytelling is a good thing. That means the story can be relatable to a much wider audience.