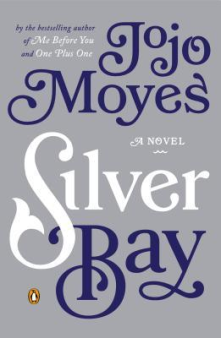 Liza McCullen will never fully escape her past. But the unspoiled beaches and tight-knit community of Silver Bay offer the freedom and safety she craves—if not for herself, then for her young daughter, Hannah. That is, until Mike Dormer arrives as a guest in her aunt’s hotel.

The mild-mannered Englishman with his too-smart clothes and distracting eyes could destroy everything Liza has worked so hard to protect: not only the family business and the bay that harbors her beloved whales, but also her conviction that she will never love—never deserve to love—again.

For his part, Mike Dormer is expecting just another business deal—an easy job kick-starting a resort in a small seaside town ripe for development. But he finds that he doesn’t quite know what to make of the eccentric inhabitants of the ramshackle Silver Bay Hotel, especially not enigmatic Liza McCullen, and their claim to the surrounding waters.

As the development begins to take on a momentum of its own, Mike’s and Liza’s worlds collide in this hugely affecting and irresistible tale full of Jojo Moyes’s signature humor and generosity.

Engrossing. Thoughtful. Moving.Enjoyable. All words that associate with my latest read of Jojo Moyes’ Silver Bay. I never can get of Moyes’ work. She is such a gifted storyteller. There is just something about her words that make the story and the characters come alive

Liza McCullen lives in a safe haven on isolated bay in Australia, with her Aunt Katherine and her daughter, Hannah. With her family by her side, no harm can pierce that safety bubble she’s created…until Mike Dormer comes along. Liza refuses to let Mike’s British charm to worm his way into her heart. However, Liza will soon discover that life has a way of bringing new chances and experiences, especially when we least expect it.

The novel just felt so real to me. Moyes never writes a “run of the mill” romance story. It is not see cheesy and it is certainly not predictable, unlike other contemporary romances. It didn’t feel like a typical romance novel. Don’t worry though. Moyes does not disappoint in that department. It just doesn’t overwhelmingly takeover the entire story. Silver Bay delves more into a realistic portrayal of realizing a new love. You feel the heartaches, the lack of trust, identity crisis…all baggage that go along with discovering a new relationship. Combined with real life trauma, it just makes the story more believable. I could feel Liza’s pain and Mike’s struggle with his identity and i don’t think that would have been possible if the language and the words didn’t make the story leap off the pages.

I read other reviewers of this book and they complained that this novel fails in comparison to Moyes’ more popular book, Me Before You. They’re right, it doesn’t. Me Before You gives more of an emotional impact that Silver Bay is lacking. But that doesn’t mean that this book should not be set aside. Silver Bay can be just as captivating and inspirational as any other novel.

Silver Bay may not be as good as Me Before You, however, it is good enough to stand on its own feet. This gives Moyes’ fans a chance to see her earlier work and read how her writing has evolved . This is definitely a Moyes novel that you should give a chance.

Overall Rating: 4 out of 5 stars

One thought on “Book Review: Silver Bay by Jojo Moyes”