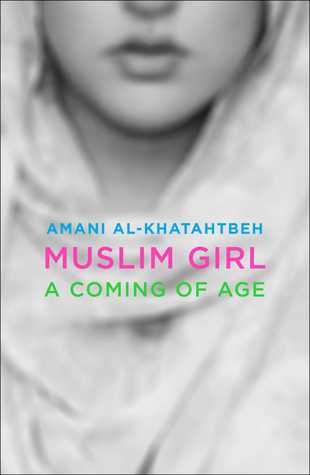 At nine years old, Amani Al-Khatahtbeh watched from her home in New Jersey as two planes crashed into the World Trade Center on September 11, 2001. That same year, she heard her first racial slur. At age eleven, when the United States had begun to invade Iraq and the television was flooded with anti-Muslim commentary, Amani felt overwhelmed with feelings of intense alienation from American society. At thirteen, her family took a trip to her father’s native homeland of Jordan, and Amani experienced firsthand a culture built on pure religion, not Islamic stereotypes.

Inspired by her trip and after years of feeling like her voice as a Muslim woman was marginalized and neglected during a time when all the media could talk about was, ironically, Muslim women, Amani created a website called MuslimGirl. As the editor-in-chief, she put together a team of Muslim women and started a life dedicated to activism.

Muslim Girl: Coming of Age is a poignant memoir that describes a young Muslim American’s growing up in a world impacted by 9/11. Amani discusses the the anti-Muslim sentiments and the racism she encountered while growing up. Through her writing, you can feel the pain of not only the hate she experienced, but the pain of Amani hiding her true self from others. The result for Amani: heartbreaking, painful and eye-opening.

Other than being a memoir that heavily discusses race and gender issues, Amani’s story and experience shows empowerment. It is encouraging and enlightening when she finally finds her voice and her acceptance of who she truly is. It was like watching her unshackle her bounds and finding her true nature. However, you still see the insecurities that she continues to face but strives to overcome, especially when it means more rights and positive exposure for Muslims.

I enjoyed reading the hypocrisy of Western media’s representation of  Muslims. Until Amani pointed it out, I never really gave it much thought. Now, I am taking a second glance at not only the representations of Muslims, but all diverse cultures. Amani didn’t like what saw so she did something about it. Her fight to combat Islamophobia and to erase stereotypes was uplifting as well as necessary especially in this tumultuous climate.

The chronological lapses, however, were poorly written. I wish they were more consistent. This was a constant problem, especially at the beginning of the memoir. I would start to lose interest because of it but fortunately, I continued reading and see it for the powerful memoir it is. Also, I wish she talked more about her experiences, most important after 9/11.  I feel more thoughts could of been expressed there.

With everything that is currently going and the uncertainty of the world we live in, I thought it was important to read more about the world and cultures that are completely different from my own. Although lacking in some areas, I felt that this was a strong and powerful memoir that needs to be read universally. It will open your eyes to what is truly out there.