Today mark’s the 50th anniversary of Earth Day. We may not be celebrating it as we usually would this year, however, if this ongoing crisis has shown that caring about the Earth is necessary more than ever. So if you want to take this unprecedented time to brush up on your knowledge on climate change, check out these book recs that can be useful to you, books in various age groups:

Greta and the Giants: inspired by Greta Thunberg’s stand to save the world by Zoë Tucker and illustrated by Zoe Persico 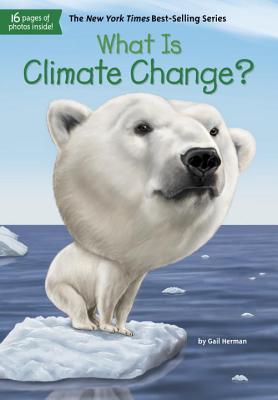 What Is Climate Change? by Gail Herman

The earth is definitely getting warmer. There’s no argument about that, but who or what is the cause? And why has climate change become a political issue? Are humans at fault? Is this just a natural development? While the vast majority of scientists who study the environment agree that humans play a large part in climate change, there is a counterargument. Author Gail Herman presents both sides of the debate in this fact-based, fair-minded, and well-researched book that looks at the subject from many perspectives, including scientific, social, and political. (Credit: Penguin Workshop)

Save the Ocean by Bethany Stahl

From exciting and adventurous to educational and captivating, Bethany Stahl’s immersive stories express heartfelt messages while engaging parents and children. With beautiful and charming illustrations, as well as a lovable sea turtle named Agwe, this is a book adults will love reading over and over again with their kids. Save the Ocean has a heartwarming lesson of recycling and conservation that will stay with the reader for a lifetime. (Credit: Bethany Stahl)

Cast Away: Poems for Our Time by Naomi Shihab Nye

“How much have you thrown away in your lifetime already? Do you ever think about it? Where does this plethora of leavings come from? How long does it take you, even one little you, to fill the can by your desk?”—Naomi Shihab Nye

National Book Award Finalist, Young People’s Poet Laureate, and devoted trash-picker-upper Naomi Shihab Nye explores these questions and more in this original collection of poetry that features more than eighty new poems. “I couldn’t save the world, but I could pick up trash,” she says in her introduction to this stunning volume.

With poems about food wrappers, lost mittens, plastic straws, refugee children, trashy talk, the environment, connection, community, responsibility to the planet, politics, immigration, time, junk mail, trash collectors, garbage trucks, all that we carry and all that we discard, this is a rich, engaging, moving, and sometimes humorous collection for readers ages twelve to adult. (Credit: Greenwillow Books) 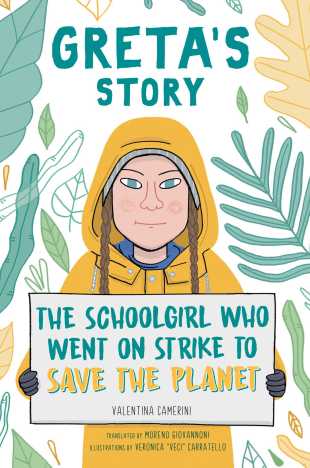 Greta’s Story: The Schoolgirl Who Went on Strike to Save the Planet by Valentina Camerini

You are never too young to make a difference.

Ever since she learned about climate change, Greta Thunberg couldn’t understand why politicians weren’t treating it as an emergency. In August 2018, temperatures in Sweden reached record highs, fires raged across the country, and fifteen-year-old Greta decided to stop waiting for political leaders to take action. Instead of going to school on Friday, she made a sign and went on strike in front of Stockholm’s parliament building.

Greta’s solo protest grew into the global Fridays for Future—or School Strike 4 Climate—movement, which millions have now joined. She has spoken at COP24 (the UN summit on climate change) and has been nominated for the Nobel Peace Prize. This timely, unofficial biography is her story, but also that of many others around the world willing to fight against the indifference of the powerful for a better future. (Credit: Aladdin) 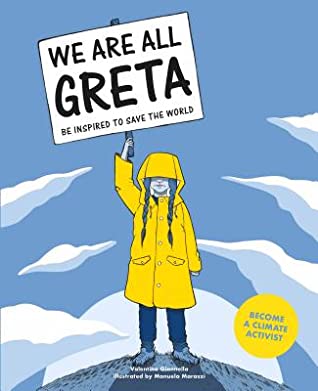 We Are All Greta: Be Inspired to Save the World by Valentina Giannella and illustrated by Manuela Marazzi

Follow in Greta Thunberg’s footsteps and join the global mission to save our planet from climate change. With in-depth text and data, this necessary and timely book will answer readers’ questions on what climate change means, what its consequences will be, and what must be done to protect our world. (Credit: Laurence King Publishing)

It’s a fact: the world is in trouble. But don’t give up! Meet Generation Hope! This book introduces 20 young activists and change-makers who are making the world a better place. They’re taking on everything from climate change and pollution to radical kindness and animal welfare. Actually, that’s just the start. Gender equality, conservation, social justice, homelessness, hunger and mental health are also on the to-do list! So if you’re feeling a bit hopeless, this book is the perfect kick up the bum. Proof that you(th) can make a difference – however big the problem! (Credit: Scholastic) 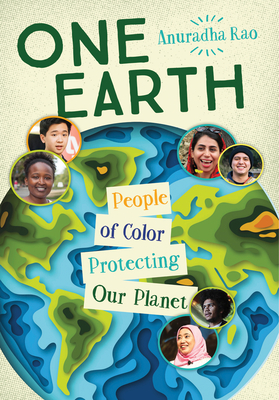 One Earth: People of Color Protecting Our Planet by Anuradha Rao

One Earth profiles Black, Indigenous and People of Color who live and work as environmental defenders. Through their individual stories, the book shows that the intersection of environment and ethnicity is an asset to achieving environmental goals. The twenty short biographies introduce readers to diverse activists from all around the world, who are of all ages and ethnicities. From saving ancient trees on the West Coast of Canada, to protecting the Irrawaddy dolphins of India, to uncovering racial inequalities in the food system in the United States, these environmental heroes are celebrated by author and biologist Anuradha Rao, who outlines how they went from being kids who cared about the environment to community leaders in their field. One Earth is full of environmental role models waiting to be found. (Credit: Orca Books) 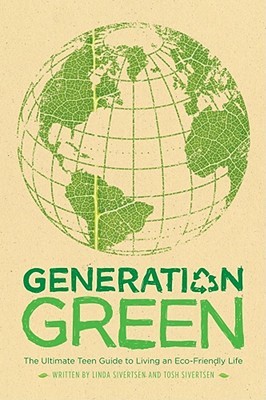 We all know about the Earth’s environmental crisis, but there is someone who can truly make a difference: you. If you text your friends or chat with them online, download music to your iPod, or toss bottles and papers into recycling bins, you’re already more eco-savvy than you think. It’s just as easy to do even more to help save the earth, and Generation Green shows you how. This book: Lays out the inside scoop on the biggest issues affecting our planet, such as global warming and overflowing landfills Offers dozens of tips on how to shop, dress, eat, and travel the green way Includes interviews with teens like you who are involved with fun, innovative green causes Shows that being environmentally conscious can be a natural part of your life — and your generation’s contribution to turning things around.

It doesn’t matter if you can’t vote or drive. Your efforts — big or small — will contribute to saving the planet. It’s time for all of us to take action. It’s time to go green! (Credit: Simon Pulse)

No One Is Too Small to Make A Difference brings you Greta in her own words, for the first time. Collecting her speeches that have made history across the globe, from the United Nations to Capitol Hill and mass street protests, her book is a rallying cry for why we must all wake up and fight to protect the living planet, no matter how powerless we feel. Our future depends upon it. (Credit: Penguin Books)

Extinction Rebellion is a global activist movement of ordinary people, demanding action from Governments. This is a book of truth and action. It has facts to arm you, stories to empower you, pages to fill in and pages to rip out, alongside instructions on how to rebel – from organising a roadblock to facing arrest.

By the time you finish this book you will have become an Extinction Rebellion activist. Act now before it’s too late. (Credit: Penguin Books)

An Inconvenient Truth: The Planetary Emergency of Global Warming and What We Can Do About It by Al Gore

An Inconvenient Truth—Gore’s groundbreaking, battle cry of a follow-up to the bestselling Earth in the Balance—is being published to tie in with a documentary film of the same name. Both the book and film were inspired by a series of multimedia presentations on global warming that Gore created and delivers to groups around the world. With this book, Gore, who is one of our environmental heroes—and a leading expert—brings together leading-edge research from top scientists around the world; photographs, charts, and other illustrations; and personal anecdotes and observations to document the fast pace and wide scope of global warming. He presents, with alarming clarity and conclusiveness—and with humor, too—that the fact of global warming is not in question and that its consequences for the world we live in will be disastrous if left unchecked. This riveting new book—written in an accessible, entertaining style—will open the eyes of even the most skeptical. (Credit: Rodale Books)

The Future We Choose: Surviving the Climate Crisisby Christiana Figueres and Tom Rivett-Carnac

In The Future We Choose, Christiana Figueres and Tom Rivett-Carnac–who led negotiations for the United Nations during the historic Paris Agreement of 2015–have written a cautionary but optimistic book about the world’s changing climate and the fate of humanity.

The authors outline two possible scenarios for our planet. In one, they describe what life on Earth will be like by 2050 if we fail to meet the Paris climate targets. In the other, they lay out what it will be like to live in a carbon neutral, regenerative world. They argue for confronting the climate crisis head-on, with determination and optimism. The Future We Choose presents our options and tells us what governments, corporations, and each of us can and must do to fend off disaster. (Credit: Knopf Publishing Group) 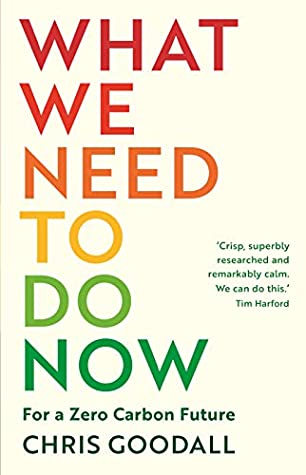 What We Need to Do Now: For a Zero Carbon Future by Chris Goodall

The UK has declared a ‘climate emergency’ and pledged to become carbon neutral by 2050. So how do we get there? Drawing on actions, policies and technologies already emerging around the world, Chris Goodall sets out the ways to achieve this. His proposals include: