Black is…sisters navigating their relationship at summer camp in Portland, Oregon, as written by Renée Watson.

Black is…three friends walking back from the community pool talking about nothing and everything, in a story by Jason Reynolds.

Black is urban and rural, wealthy and poor, mixed race, immigrants, and more—because there are countless ways to be Black enough. 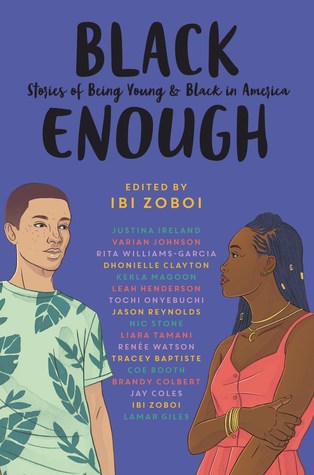 Black Enough? It should be titled “Not Good Enough.” I really wanted to like this one. When I saw this book was being released, I said: “Finally, stories that will realistically portray black youth in America.” I went into this book with high expectations. However, I was left with disappointment.

I was expecting stories that highlighted the black youth’s experience in America. I found them empty, generic and lacking any depth. Many of the stories had very little or nothing to do with race, which leads to this question: why was this book titled Black Enough? Black youth deal with racism, prejudice, and stereotypes. I wanted short stories that reflected those social issues. But I felt that readers were given short stories that could basically happen to anybody.

I also had a problem with the message of some of the stories. For example, the short story title “Black Enough” made it appear that not responding properly to social media posts will cause you not only to alienate your friends but give the perception that you as a black person are not reacting properly to the “right sort” of news. I feel that this was sending the wrong message, particularly to teen readers. Yes, we want the stories we tell to be realistic but we want them to be left with a positive perspective.

Don’t think the message was the only problem I had with this anthology. The writing was just so poor and not very enticing that I literally fell asleep at my work desk while reading this book. That is usually the telltale sign that you are not enjoying a book. These may have been short stories but I expected them to have the same effect that a full novel gives. There are some talented authors in this collection but their literary expertise didn’t really shine here.

It is so important that we have stories that truly reflect the black youth of the US. Unfortunately, this is not the book that accomplishes that feat. Mediocre writing and constant use of popular misconceptions caused this anthology to lose its impact and definitely miss the mark.

Overall rating: 1 out of 5 stars

Get It At: Amazon |Barnes & Noble|Book Depository|IndieBound| Your local library