A teenage murder witness is drowned in a tub of apples… At a Hallowe’en party, Joyce—a hostile thirteen-year-old—boasts that she once witnessed a murder. When no-one believes her, she storms off home. But within hours her body is found, still in the house, drowned in an apple-bobbing tub. That night, Hercule Poirot is called in to find the ‘evil presence’. But first he must establish whether he is looking for a murderer or a double-murderer… 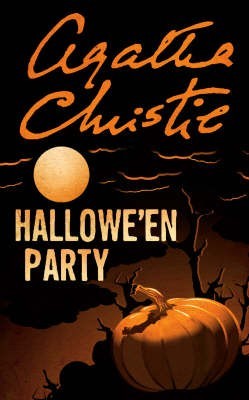 As always, Agatha Christie has written another winner. Hallowe’en Party is not only entertaining but provides just the right amount of mystery and psychological thrills that encourages any reader to finish this story in one sitting. Christie’s gift of storytelling really shines through this Hercule Poirot story. Some might think that Christie is going off tangent and be moving away from the story. In fact, what Christie is doing is laying out clues and it is up to the reader to figure them out. This is one Christie mystery where you have to pay attention.

Hercule Poirot is one of the best literary detectives. His expertise really shined in Murder on the Orient Express but I don’t think truly understood how good he was until I read this one. Poirot maybe pompous and a bit of a snob but his detecting skills outshine his other negative qualities. The way he manages to pick up the little things from suspects without them realizing it is amazing to read. He uses their unsuspecting tales to his own advantage. The detective may appear docile and unassertive, but don’t let that passive personality fool you. His quiet and pensive nature allows him to not only outsmart the suspects, but also the readers.

You are in for a psychological ride with this Agatha Christie classic. Not only is it a perfect read for British mystery lovers, but also perfect to read for Halloween.

Overall Rating: 4 out of 5 stars

Get It At: Amazon |Barnes & Noble|Book Depository| Your local library

One thought on “Book Review: Hallowe’en Party by Agatha Christie”