It was a dark and stormy night; Meg Murry, her small brother Charles Wallace, and her mother had come down to the kitchen for a midnight snack when they were upset by the arrival of a most disturbing stranger.

“Wild nights are my glory,” the unearthly stranger told them. “I just got caught in a downdraft and blown off course. Let me be on my way. Speaking of way, by the way, there is such a thing as a tesseract”.

Meg’s father had been experimenting with this fifth dimension of time travel when he mysteriously disappeared. Now the time has come for Meg, her friend Calvin, and Charles Wallace to rescue him. But can they outwit the forces of evil they will encounter on their heart-stopping journey through space? 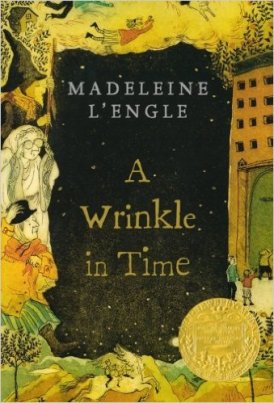 I read A Wrinkle in Time when I was a child. It never really grabbed me. All I remember was that I didn’t like it and I chose not to continue with the series. So with the latest movie adaptation about to be released, I thought I would reread it again and see if I would feel differently about it.

I just could not understand it. It just did not make any sense to me. Maybe I had to had to have the mindset of a child. However, I don’t believe any child could possibly understand this. I understand it incorporates a lot of different themes, such as Christianity, importance of family, and individuality, which are all important themes. But, those themes are constantly overlooked when you have story that doesn’t really go anywhere and a plot that goes way over your head. The concept of time travel is not what bothers me. It is just how it was explained (L’Engle could have written better explanation for “the wrinkle in time” than a piece of string and an ant).

It’s great to get young children in math and science but I do wish it was spoken in terms that they could understand. Not dumb it down, but in a way that will incite passion to learn more about the subjects. I was only infuriated by this, which is probably one of the reasons why the book never grabbed me when I was a child. The one thing that irked me the most was the ending. Here I am, reaching close to the end of the book, thinking that all will be explained and I find that I am left more confused than ever. The ending was completely rushed and weak. L’Engle wasted a perfect opportunity to explain so much about everything that happened.  However, she leaves us with more questions than answers.

Madeline L’Engle is a gifted writer and has written other children’s novels that exemplify her talents. But A Wrinkle in Time is just not one of them. This book was rejected by 26 publishers and I can see why. The latest adaptation of the novel was released today and unfortunately, it is not faring any better. The confusing story and the constant inconsistencies are reflected in the film, just as much as it was in the book. However, I hope the lack of critical success doesn’t prevent more diverse casting in other films. Diverse casting is much-needed in Hollywood but gets overlooked when the story doesn’t work. Unfortunately if Disney had any serious faith behind the film, they would have chosen an easier medium to adapt, not a book that Hollywood deemed “unfilmable” .

Overall rating: 2 out of 5 stars

One thought on “Book Review: A Wrinkle in Time by Madeleine L’Engle”