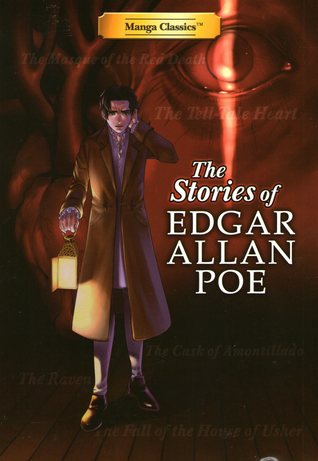 The Tales of Edgar Allan Poe is a brilliant collection of some of his best-known stories: The Tell Tale Heart (a murder s haunting guilt), The Cask of Amontillado (a story of brilliant revenge), and The Fall of the House of Usher (an ancient house full of very dark secrets). Also included in this collection are The Mask of the Red Death (horrors of ‘the Plague’), and the most famous of all his poems: The Raven (a lover s decline into madness). Best read in a dimly-lit room with the curtains drawn, Poe s brilliant works come to life in darkly thrilling ways in this Manga Classic adaptation.”
As always, Manga Classics adaptations does a great job interpreting classic stories. However, this might have been a miss with me. The artwork was beautiful, as always, but the storytelling and the pace was a little stagnating with some the short stories. This version of Poe’s stories may have a hard time grabbing a young reader audience, especially if they are not interested in the story. This edition consisted of manga versions of Poe’s works and some of them were adapted beautifully:

The Tell-Tale Heart: Very well done. Really capture the murder’s guilt so well
The Raven: I loved the art work in this version. And it is hard to adapt a poem into story format and this adaptation managed to a great job at it! The depiction of the last scene was my absolute favorite.
The Cask of Amontillado: This story has never been of favorite of mine so I was hesitant of it at the beginning. With how it was depicted, I don’t think readers who are new to Poe would warm to this story or would want to read the original. It just felt a little stale.
The Mask of the Red Death: My first time reading this story and for me, I do want to go read the original, but lack of dialogue would cause some readers to be bored, which is the books fault. There is isn’t that much dialogue in the original but I feel that most people would have complaints about that lacking feature.
The Fall of the House of Usher : Really caught the passion, the mystery, and the paranoia really well! it was slow moving at times but that is how the original is. The details of the characters’ expressions were unlike I have ever seen in most mangas and graphic novels. I wish more artists paid that much attention to detail.

If you enjoy the Manga Classics series as much as I do, then read this latest edition. But be prepared. Some Poe enthusiasts might be on the fence on whether or not this version is faithful to the master of mystery’s work.