BuzzFeed compiled a list of beautiful places that every Jane Austen fan should visit. And if I had the money, I would be hopping on a plane right now. Check them out (not in any particular order):

No list can be complete without putting the Jane Austen House Museum. I’ve been there twice and I love it! Apart from the interesting historical artifacts, you have the gorgeous surroundings to make it a perfect outing.

Located not too far from the Jane Austen Museum, Chawton House was the house of Jane’s brother Edward. Now, the house’s library is open to visitors along with the gardens.. 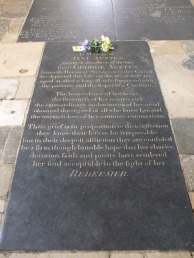 Where Jane Austen is buried.

A small museum located in Bath, where Austen lived for a time.

Mr. Bingley’s House in the 2005 adaptation of Pride and Prejudice

Pemberley! Or what was used as Pemberely in the 1995 adaptation of Pride and Prejudice.

Not only used as Pemberley in the 2005 adaptation Pride and Prejudice, it is also one of the estates Elizabeth visited during her lake tour with her aunt and uncle.

Have yourself a Box Hill picnic, just like Emma!

Location not only used in the 1995 adaptation of Pride and Prejudice as the village of Meryton, but Harry Potter was filmed here.