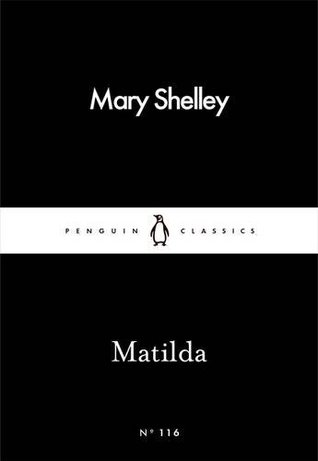 Mary Shelley’s dark story of a bereaved man’s disturbing passion for his daughter was suppressed by her own father, and not published for over a century.

The only book I read from Mary Shelley was Frankenstein. So when I saw this novella, a story that her own father suppressed, I was very intrigued. Frankenstein  is one of my all-time favorite books so I wanted to see what other books Mary Shelley wrote.

Matilda is somewhat like Frankenstein, dealing along the same theme of the parent-child relationship. Shelley does a great job of having the reader identify with Matilda’s abandonment and loneliness issues. As the reader, you get the dive in her complicated relationship with not only with a mother she never got to meet but a father who abandoned her. Intensity of these relationships was clearly felt and Shelley did a great job portrayal for the first half of her tale.

The subject of incest, disgusting as it is, was one of the things that interested me in reading in this story. However, Shelley barely approach the subject, only a mere declaration from Matilda’s father. When this occurs, you get the overly dramatic and emotional telling of both Matilda and her father’s feelings, a perfect example of living in the Romantic Era. This when it got a little repetitive and at times straining to read. I was going to completely write this story off until I realized that I needed to do some more historical research to understand a little more of Mary Shelley’s intention of writing this story.

To understand Matilda, you need to know learn the background of the author. Mary Shelley is the daughter of feminist philosopher and writer, Mary Wollstonecraft. Wollstonecraft contracted an infection from the birth and died ten days after Shelley was born. William Goodwin left Mary in the care of a family member for a time while he traveled around Ireland.Although there is no evidence to the contrary, you might consider this novella a little bit of an autobiographical account of Mary Shelley’s life. So finding more about Goodwin’s and Shelley’s relationship, I saw that this was a perfect example of the parent-child relationship.

Then I discovered the reason why Shelley wrote this Matilda. Shelley and her husband, Percy Shelley, lost two of their children and writing this novella distracted Mary from her grief. Mary became emotionally and sexually distant from Percy so maybe writing this story helped her put her feelings in words. That could be the reason why it was so overly dramatic and at times all over the place. The story may have been a downer and have a depressing ending but it was how Mary felt at the time and the only way she can put her feelings into words. It gave her chance to look back at her life and examine her present and somehow combined the two to create a story, no matter how controversial it may be.

So be prepared. If you would like to read this story (and I highly suggest that you would), try to keep an open mind. Don’t look at as another Frankenstein because it is not. Knowing more about Mary’s history actually gave me a better understanding of Matilda and this novella gives us a rare look into this great novelist’s life.